It was a great day to be a Lady Apache Wrestler on Friday November 30, 2018 at the Lemoore Last Girl Standing Tournament. 10 Lady Apaches competed out of a 16 Girl roster and 6 brought home a top 4 placing.

Next at the 111 pound weight class Sanger sophomore Alexa Ortiz also had a 4th Place finish. Ortiz started off the tournament with a first round bye. She then advanced to the quarterfinals facing off against Maria Hernandez of Arvin. Ortiz fell to Hernandez in the 2nd period by Fall to put Ortiz into the Consolation bracket. Ortiz’s next match was against Hoover’s Emily Cano which lasted 1 minute 20 seconds as Ortiz picked up the pin advancing her into the Consolation semifinals. Ortiz’s next match was a rematch from the November 28th exhibition match vs Hoover’s Gloria Cerda. It was a battle all the way till the end as Ortiz comes up with the win by decision 9-7 advancing her to the 3rd and 4th Place match. Ortiz’s medal match was against her first round loss rival Maria Hernandez of Arvin. Ortiz loses to Hernandez to give her a 4th Place finish in the tournament.

At 143 pounds Sophomore Abbey Ellis came into the tournament as the #2 seed taking a bye first round. Second round of championship Ellis takes on Golden West’s Chloe Botello and pulls out a 3rd period pin advancing Ellis to the Semifinals to take on Jocelyn Elizondo of Reedley. Ellis gets the victory in the first round by Fall in 1 minute 50 seconds advancing Ellis to the finals. Ellis faces off agains Golden West Junior Jessica Lopez. Lopez dominated the match winning by tech fall 16-1 to give Ellis the silver medal.

Sanger Junior Virginia Rios, the Apaches second 160 pounder also had a great tournament. Rios’s first match of the was against Alilah Delgadillio of Mission Oak. Delgadillio would pin Rios in the second round dropping Rios to the Consolation bracket. Rios’s next two matches would end with two pins, beating Lathrop’s Amelia Latifi and Lathrop’s Kristina Rose pitting Rios into the Consolation semifinals against Arvin’s Ely Salas. Rios would go on to beat Salas in a tight one by decision 3-2. Rios would move on to the 3rd and 4th Place match against Madison Medina of Porterville. The match would last no more that :30 seconds as Rios gets the pin to bring home bronze.

At 116 pounds Sanger Freshman Sarah Robins had an incredible first tournament of her career. Robins finished with scoring 29 points in her last two matches of the day.

At 131 pounds Sanger Freshman Makayla DuPont made her debut as a Varsity lady Apache and had a tough tournament. DuPont is looking to improve in any way possible for the next upcoming competition.

At 189 Sanger Junior Liliana Alcantar also made her tournament Debut. Alcantar wrestled well but is looking to move down a weight class in the future.

Katlyn Estep at HWT also seeking a lower weight class wrestled for the first time of her career and had tough matches showing improvement from the Central scrimmage on November 14th. 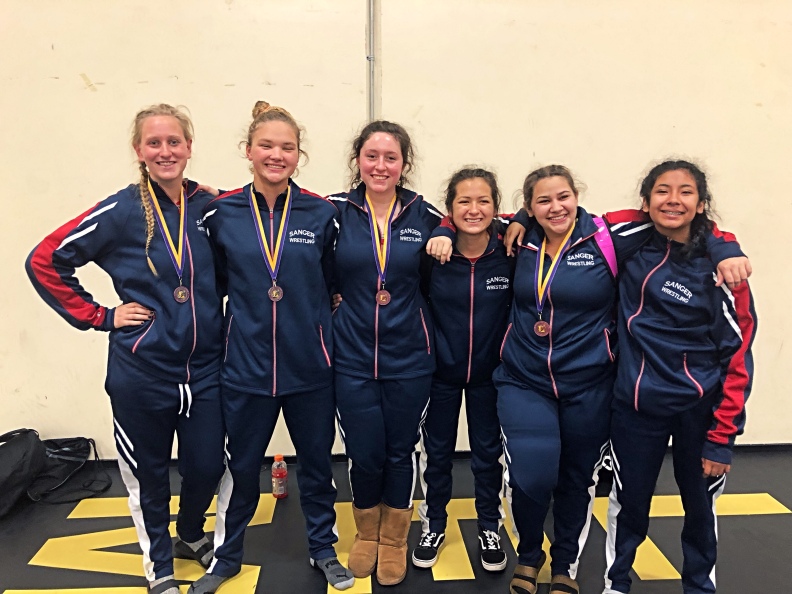 Lady Apaches Finish 5th Place as a Team out of 23 teams.